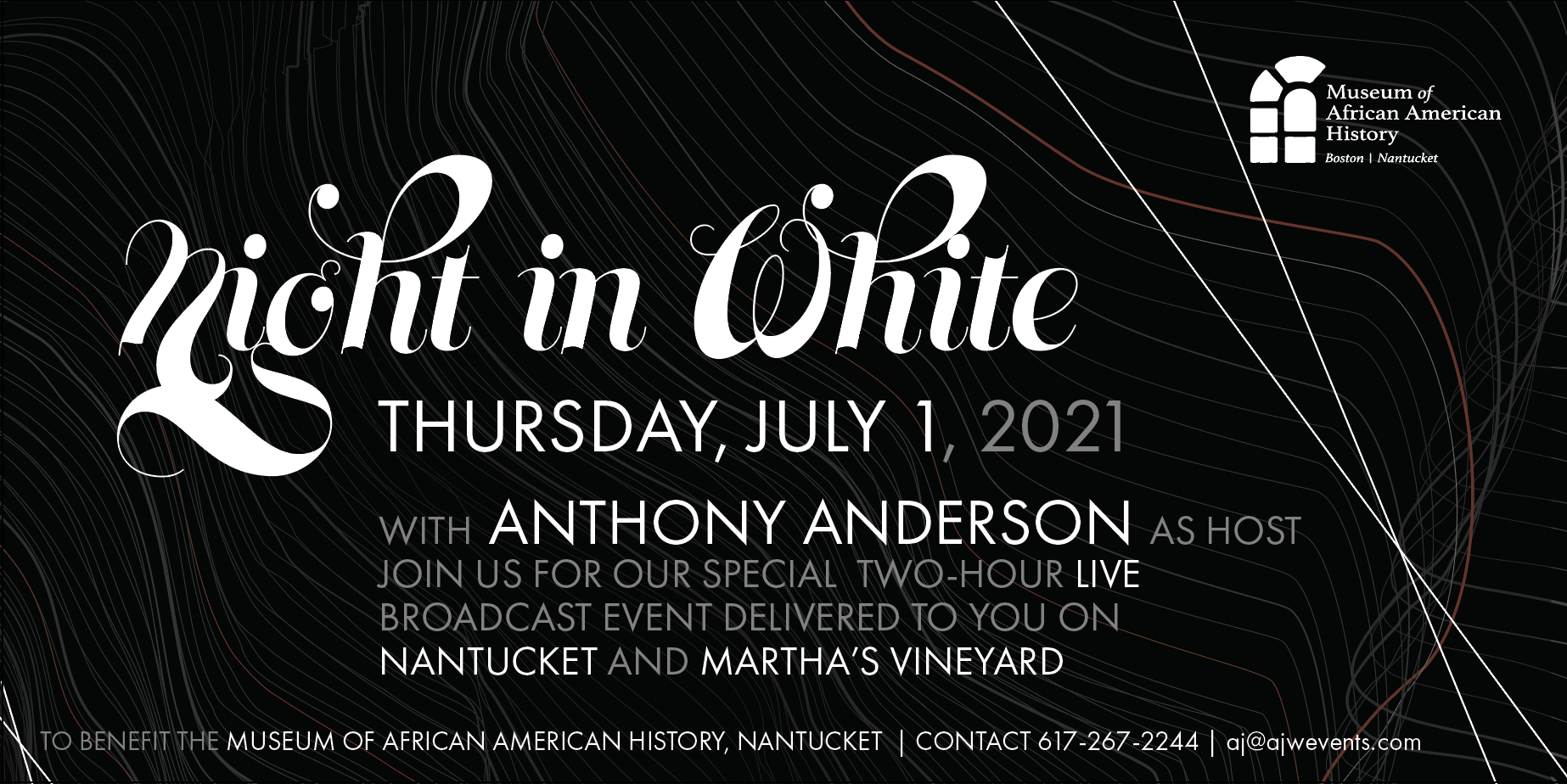 NIGHT IN WHITE
A LIVE VIRTUAL EXPERIENCE, DELIVERED, TO YOU!
Join the Museum of African American History, Nantucket for a special LIVE Broadcast of our annual Night in White, with our host, Emmy, and Golden Globe-nominated actor and star ABC's hit TV Show, "black-ish" —Anthony Anderson.

This year's gala promises to be a fun-filled interactive event, with a 360-degree virtual experience you'll never forget!

Enjoy the Night in White experience with friends and family from the comfort of your House Party. You and your guests will enjoy a gourmet meal accompanied by a selection of fine wines by Josh Wine Cellars and curated "Party in a Box" delivered directly to your destination on Nantucket or Martha's Vineyard. Not on Island, come watch our Studio Live Performance on the mainland.

Socialize and network. The gala will kick off with an interactive reception with attendees from both islands and our Studio. Music provided by our special guest DJ.

The Main Event. Experience our official live program with host Anthony Anderson, featuring the untold history of the small but mighty Black community on Nantucket, an exclusive live auction, dance music, a lively atmosphere with YOU.

We may even crash your House Party with camera crew and stream live from your home. —JOIN US AND PRESERVE THE LEGACY
I'M IN! PURCHASE HERE
Location
A Live Broadcast Production Streamed to your Home or destination on Nantucket or Martha's Vineyard.

Not on Island? Come watch our Studio Live Performance on mainland.
Date & Time
July 1, 2021
6:00 PM - 8:00 PM
SCHEDULE
6:00 pM
Night in White Pre-Party
Grab your wines by Josh Wine Cellars, a bite to eat, and network LIVE with House Parties and our in-person Studio guests, during our 30-minute Interactive Reception. Featuring entertainment by our Special Guest DJ.
6:30 PM
Program with Host —Anthony Anderson
Join us for the Night in White program with Host, Anthony Anderson featuring stories about history, our live auction and YOU!
7:30 pM
Post Party
Grab a refill and jamm with our Special Guest DJ.
NIGHT IN WHITE HOST
Anthony Anderson
Emmy and Golden Globe-nominated Actor and star of ABC's TV Show, "black-ish"
Anthony Anderson is the star and executive producer of ABC's Emmy-nominated sitcom”black-ish.”  Anderson hosted this year’s NAACP Image Awards and has won two NAACP Image Awards himself. Anderson has earned two Emmy nominations for his role as Dre, a family man that struggles to gain a sense of cultural identity while raising his kids in a predominantly white, upper-middle-class neighborhood. Anthony stars opposite Tracee Ellis Ross and Laurence Fishburne.  In December 2018, Anderson received the Living Legend Award from the Museum of African American History, Boston. Anderson has appeared in over 20 films, and his performance on “Law & Order” earned him his fourth consecutive NAACP Image Award nomination for Outstanding Actor in a Drama Series for the 2010 season. Before joining “Law & Order,” Anderson starred in the New Orleans-based drama “K-Ville.” Over the years, he has displayed his bountiful talent in the DreamWorks' blockbuster “Transformers,” directed by Michael Bay, as well as in Martin Scorsese's Oscar-winning feature, “The Departed,” alongside a stellar cast including Leonardo DiCaprio, Matt Damon, and Jack Nicholson.
HOUSE PARTY PACKAGES
Join us for the Night in White program with Host, Anthony Anderson featuring stories about history, our exclusive live auction, and YOU!
I'M IN! PURCHASE MY HOUSE PARTY HERE
CULINARY PARTNERS
PPX Events
Nantucket
Josh Wine Cellars
The Kitchen Porch
Martha's Vineyard
THANK YOU TO ALL OF OUR SUPPORTERS. WE APPRECIATE YOU!