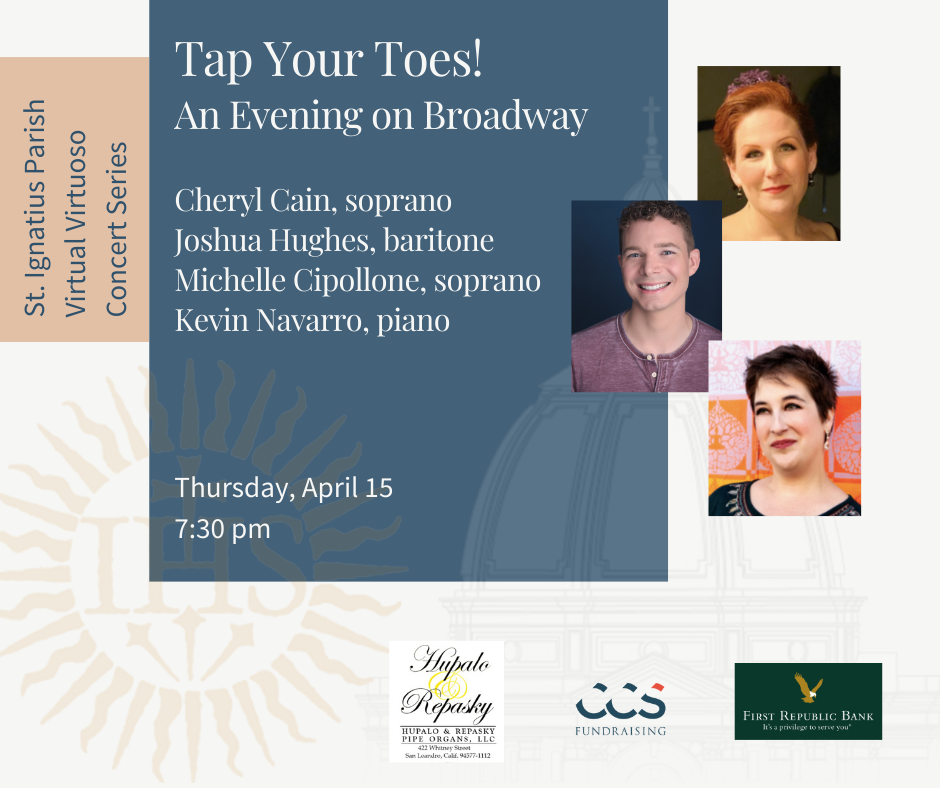 Join us on April 15
We look forward to seeing you!
VIEW CONCERT
Tap Your Toes! An Evening on Broadway.
Join us on April 15
Welcome to the Spring 2021 Season of the Virtual Virtuoso Concert Series!  Nearly one year ago, the community at St. Ignatius developed this concert series just a few months after strict COVID-19 restrictions were implemented across the country.  In San Francisco, local health ordinances required the closure of all concert halls and performance venues, and the performing arts community suffered devastating financial blows as a result of the cancellation of most public events.  Our unique concert series, broadcast live at St. Ignatius has been able to provide very safe, creative and fun opportunities for local musicians to once again engage with a live audience. I was fortunate enough to host the first Virtual Virtuoso Concert on May 21st, 2020, and since then we've produced over 20 "Virtual Virtuoso Concerts" featuring incredibly talented educators, members of San Francisco Symphony & Opera, and even a Grammy winner.

This evening, we are thrilled to present something new: A NIGHT OF MUSICAL THEATRE!!!  With the help and expertise of some very talented vocalists, we've been able to curate an incredible collection of songs and shows that represent the best of American Musical Theatre.  You'll hear from Stephen Sondheim, one of the most important composers of the 20th century.  Sondheim is recognized for "reinventing the American musical," with music and lyrics "of unprecedented complexity and sophistication."  We'll bring back fond memories with one of America's most beloved musicals "Guys & Dolls," with classic songs such as "Luck be a Lady" and "If I were a Bell."  We'll conclude the evening with Leonard Bernstein's classic "On the Town," which was based on Jerome Robbins ballet "Fancy-Free" and eventually became a film in 1949.  The musical, which integrates dance into it's story telling, produced many instant classics including "New York, New York," "LonelyTown," and "I Can Cook Too."

Thank you so much for the incredible support you've provided us during this unprecedented time.  We look forward to the day we can once again perform for a live audience, and until then we hope you enjoy the first of our Spring Virtual Virtuoso Concerts!! 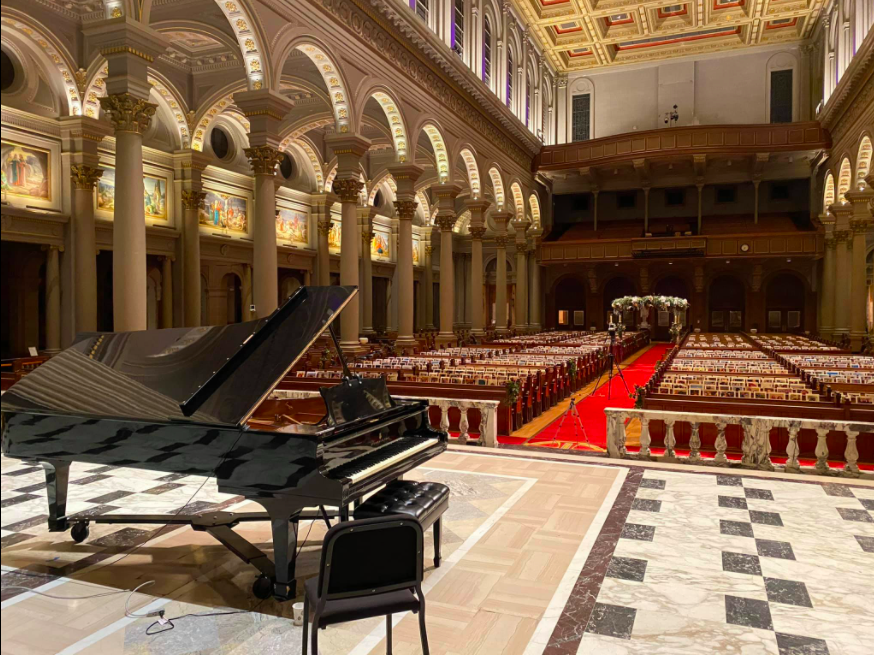 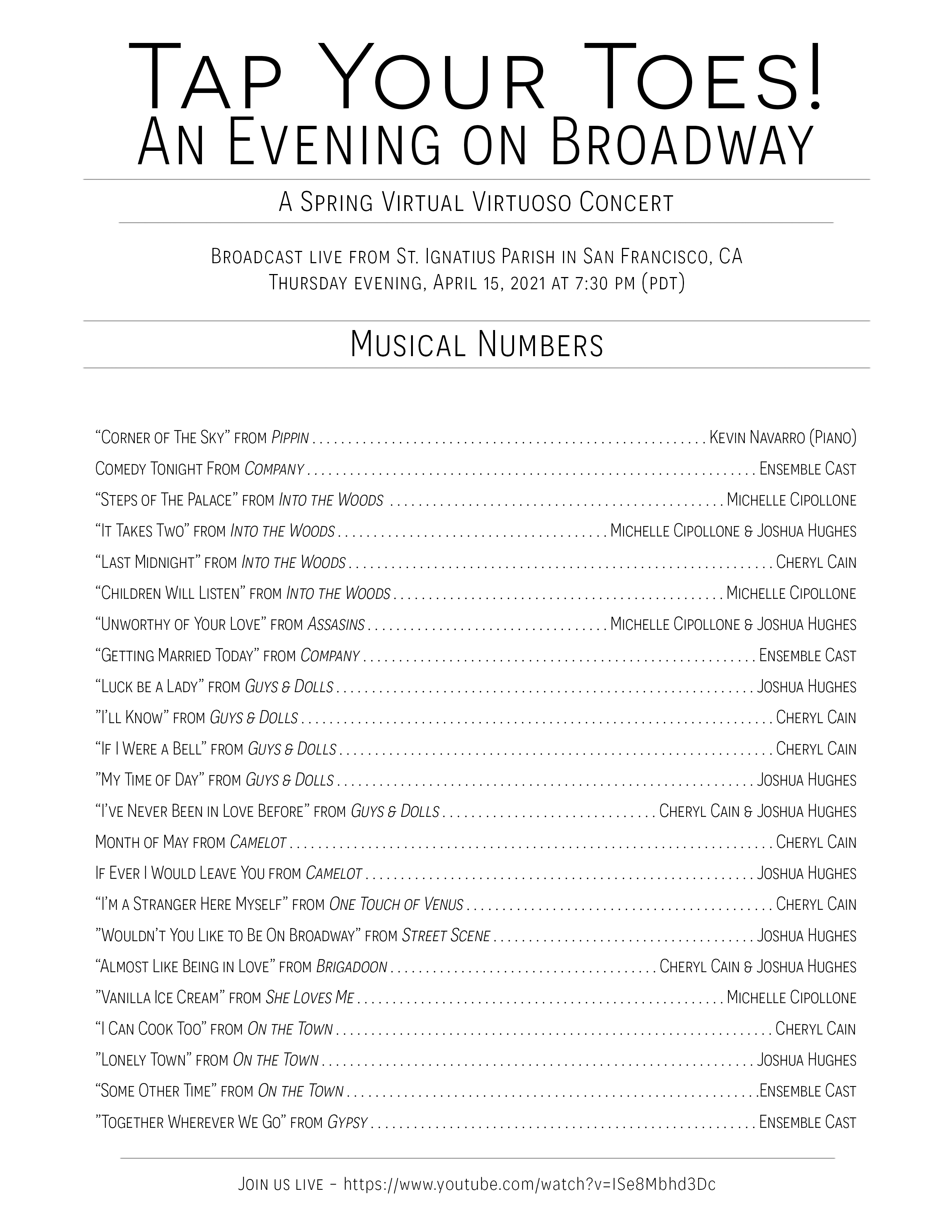 Join us on April 15
We look forward to seeing you!
VIEW CONCERT
Meet the Artist
Cheryl Cain
Cheryl Cain is a professional singer, violinist and teacher in San Francisco. She performs with the San Francisco Opera, the San Francisco Symphony, American Bach Soloists, Cappella SF, Philharmonia Baroque Orchestra and Chorale, and many others. She has her Master of Music degree from the Manhattan School of Music﻿ and her Bachelor of Music degree from the San Francisco Conservatory of Music﻿. She continued her studies in opera in Florence, Italy with Franco Pagliazzi. She is a member of the American Guild of Musical Artists and the National Association of Teachers of Singing. She teaches voice, violin and more.

www.cherylcain.com
Join us on April 15
We look forward to seeing you!
VIEW CONCERT
Meet the Artist
Michelle Cipollone
Michelle Cipollone, soprano, recently performed virtually with LAH-SOW Bloomington and LAH-SOW Portland, singing the role of Mutter in Humperdink's Hansel Und Gretel, and Erste Dame in Die Zauberflote.  Her other operatic roles performed include; La Ciesca (Gianni Schicchi), Ino (Semele), Kathie (The Student Prince), Maestra Della Novizie (Suor Angelica), and Giunone (La Calisto).  She has also portrayed the characters of Mimi (La Boheme), Countess (La Nozze di Figaro), Micaela (Carmen), and Florencia Grimaldi (Florencia en el Amazonias) in excerpted opera scenes.  In addition to operatic roles, Michelle has also toured internationally as a featured soloist with choral ensembles to Spain and Ireland, as well as singing solos in choral pieces and oratorio works with choirs in her hometown of Medford, Oregon.  Michelle earned her Bachelor's Degree in Music Education from Pacific Lutheran University, and her Master's Degree from the San Francisco Conservatory of Music.  Michelle currently studies voice under the tutelage of Jane Randolph.
Join us on April 15
We look forward to seeing you!
VIEW CONCERT
Meet the Artist
Joshua Hughes
Bass-Baritone Joshua Hughes, lauded for his “lush, rich” voice (TheatreBloom), "powerful lyricism" (Texas Classical Review), and "brilliant vocal range” (DC Metro Theater Arts), has performed in opera, operetta, theatre, cabarets, and concerts ranging from Gilbert and Sullivan to Mozart to Shakespeare. Joshua recently returned from abroad performing as a holiday vocalist and caroler at Hong Kong Disneyland. Previous credits include Bach’s Saint John Passion with Soli Deo Gloria, La Rêve de Carmen  (Escamillo) with Opera on Tap San Francisco, Barab’s Little Red Riding Hood (Wolf) with Opera San José, Courcelle’s Achille in Sciro (Licomede) with Orchestra of New Spain, Pergolesi’s La Serva Padrona(Uberto) and Handel’s Alcina (Melisso) with American Baroque Opera Company, Boris Blacher’s Die Flut (Der Fischer) and Weill’s Mahagonny Songspiel (Bobby) with Opera in Concert, and Purcell’s The Fairy Queen, Bach’s Saint Matthew Passion, and Charpentier’s Les Arts Florissants with Dallas Bach Society. Hughes received his Master of Music in Voice Performance and Pedagogy from the Peabody Conservatory of The Johns Hopkins University and his Bachelor of Music Education from Oklahoma City University.
www.joshuahughesbassbaritone.com
Join us on April 15
We look forward to seeing you!
VIEW CONCERT
navarropiano.com
Meet the Artist
Kevin Navarro
Kevin Navarro, classical pianist and vocal accompanist is a native of Seattle, Washington and has resided in San Francisco for the past nine years. Kevin earned his Bachelor's of Music in Piano Performance from Pacific Lutheran University School of Music, where he studied under Dr. Calvin Knapp of the Julliard School, Dr. Richard Nance, Director of Choral Activities and Mira Frohnmayer, Chair of Vocal Studies at PLU School of Music. During his tenure at PLU, Kevin served as the choral accompanist for both University Chorale, and internationally renowned Choir of the West. Kevin was very active in musical theatre and opera productions in the Seattle/Tacoma region, and has served as a principle/stage accompanist for PLU Opera Workshop, Tacoma Opera, Seattle Opera and the Tacoma Musical Playhouse including productions such as Madame Butterfly, Marriage of Figaro, Magic Flute, and West Side Story. In addition to maintaining an active solo performance schedule, Kevin serves as accompanist on Piano & Organ at St. Ignatius Parish in San Francisco, CA.

In December 2020, Kevin qualified for the semi-finals of the "Music International Grand Prix" adult piano competition.  At his San Francisco audition, Kevin placed 2nd among all candidates in the Los Angeles, San Francisco, and Asia regions.
Join us on April 15
We look forward to seeing you!
VIEW CONCERT
Contact Us
We look forward to seeing you on Thursday, April 15th at 7:30pm PDT!!!  Please let us know if you have ANY questions about the show, date time, concert link etc...

If you are interested in performing with the Virtual Virtuoso Concert Series please send us a note, we'd love to meet you!  Thank you all so much and we look forward to seeing you on April 15th!